Seemingly harmless at first glance, the Seeker acts as a scout, signaling your location to nearby allies who will come to its aid. Make sure to stay out of the sensor range or take it down quickly to avoid being overwhelmed by reinforcements.

The Seekers aren't combat-focused machines. Instead, they will roam the land, often in packs, and look for survivors of the machine uprising. Seekers have superior detection, and when a player is spotted, they sound an extremely loud horn which brings other robots that are nearby to their location. This can cause the player to be quickly overwhelmed by Runners and Hunters. If a Tank is in range, it can also draw their attention, in which they will rush to the Seeker and change into "searching" status (orange detection meter).

Seekers are probably the easiest enemy to handle.

A single shot to one of the thrusters from an assault or sniper rifle will usually bring the prototype and military variants down. Another stragey is to get up close and deliver a shotgun blast to the body, this will usually kill them in one blow.

One or two hits with a melee weapon is also enough to finish a Seeker.

Curse this day and everything in it! Why can it never be simple? Why can’t a routine scavenge run in a newly discovered village go smoothly? Why do the machines have to come up with new ways to find and attack us? We were being so good too, methodical. Scanned each room, looking for info on where the others had gone, then moved on. We were making record time. And then we saw it.

Or maybe it’s more accurate to say that we heard it first. It looked like something straight out of a science-fiction movie, this weird little machine hovering just a few feet off the ground. It wasn’t particularly big or threatening, with its small body, dangling legs and small jet engines keeping it airborne. But the noise it was emitting had us on edge, this weird digital sound that was a combination of buzzing, beeping and screeching. Not only that, but it seemed to be scanning its surroundings, looking for who knows what. Like some kind of scout, a Seeker.

Of course, it managed to spot us. And then it began making a new series of noises that almost sounded like it was processing what it was looking at. We turned around to sneak out of there, and that’s when the blasted thing started to let off a really loud and abrasive noise. It could only have been some kind of alarm, for shortly thereafter we heard the distinct sound of Runners heading our way. Another pack no less. Once again we were forced to run out of there as fast as we could before we got overwhelmed. But we made sure to shoot the damn thing down first. Always hated tattletales. 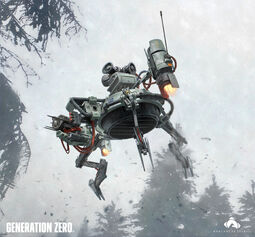 seeker in a forest

seeker in a town 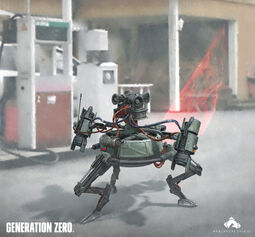 seeker on the ground
Add a photo to this gallery

Retrieved from "https://generation-zero.fandom.com/wiki/Seeker?oldid=6174"
Community content is available under CC-BY-SA unless otherwise noted.