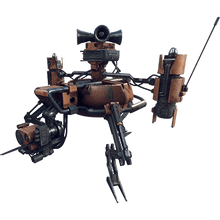 Intelligent, swift, and silent, the Hunter attacks with lethal precision, showcasing a diverse range of tactics and weaponry to take you down. Get too close and you risk getting a knife in the gut, while at a distance you must constantly seek cover or end up riddled with bullets.

Once the Hunter has gotten close to you, it will jump up far into the air, and then stab you with its sharp blade. You will notice a loud wail when it is performing this attack. It can attack you up close with a backhanded slice. At longer distances, it will fire at you with its machine gun or other arm-mounted weapon. If a Hunter notices something (when the stealth bar turns yellow), it will howl once and begin traveling to the last seen location you were noticed and begin roaming in searching status. When a Hunter detects you, they will make a howling sound that attracts any other machines in the area, especially Hunters it travels in a pack with,similarly to a Seeker. This sound was likely also used as a weapon of terror during the initial invasion.

Military class Hunters are armed with toxic gas grenades, making them even more lethal at a distance and effective at pushing targets out of cover. Note: The gas currently penetrates walls.

FNIX class Hunters often come equipped with an explosive flechette gun. It launches a glowing red projectile that sticks to any surface before exploding. This weapon can kill a player in one shot, so it's important to be aware of it's distinctive rapid beeping sound and red glow of where the flechettes land. This is especially important since occasionally Hunters will fire these rounds next to or past your cover. The flechettes can also stick directly onto you so staying mobile is an effective counter to this weapon. Note: The flechette doesn't deal damage when shot, but the explosion from each flechette deals damage.

Some Military and FNIX class Hunters come equipped with sniper rifles can use them to attack from much farther away than with their other weapons and is capable of penetrating certain walls. This means that you may find yourself taking fire from unexpected locations, especially if you've accidentally alerted a roaming group while in combat. To prevent this situation, keep on the move from cover to cover, so that none of these long-range Hunters can flank you. These Hunters also have a red laser in the direction they are aiming. If you are being aimed at, you will see the Hunter have a red glow above its right shoulder.

An effective strategy to quickly destroy a Hunter is to first stun them with EMP, whether with an EMP cell, EMP round, or environmental hazard. Then place multiple explosive tanks underneath them. Running away and detonating the tanks will almost certainly kill the Hunter, as most of their weak points are either low to the ground or on their backs.

Another strategy, one that is especially useful when fighting a large group of machines, is to target the Hunter's arm-mounted weapons. It takes only a few shots from sniper rifles, or a small burst from assault rifles to knock them off, greatly decreasing the Hunter's combat effectiveness. If you then target any shoulder-mounted weapons, you can make them effectively useless as long as you remain outside of melee range.

I never knew death was a machine. Sure, the behemoth that is the Tank is a more explosive form of death, but this… this was something else. The group was making its way through a dense forest, taking a shortcut in the hopes of reaching shelter before dark. Suddenly, we hear rustling in the leaves. Holding our breaths, we pray that it’s a wild animal. Or heck, even a Runner would be manageable. We’ve gotten quite proficient at taking those dog-like machines down, especially when our team is assembled.

But no such luck. What emerged from between the trees was larger than any of us, hunched over, swiftly and silently making a beeline for our group. Aiming one of its hands at us, it opened fire. It was meant to leave the group scattered and confused, leave us unprepared for the next attack. As it charged, the blade on its other arm caught a reflection of the setting sun. This was an apex predator, a natural born Hunter. And it was here to claim us.

Worse yet, it was far more clever than we had anticipated: while it had us distracted, fellow machines had flanked us. It was a trap. We dispersed, trying to put any and all cover between us and the machines. They moved with grace, with a lethal intelligence that put them above the others we’d met. All we could do was flee like the prey we were, burrow ourselves under any cover we could find in the hopes it would make us invisible. And somehow, we managed to escape. Luck must have been on our side today. But I have now looked death in the face, and what I saw chilled me to the bones.

Retrieved from "https://generation-zero.fandom.com/wiki/Hunter?oldid=5347"
Community content is available under CC-BY-SA unless otherwise noted.